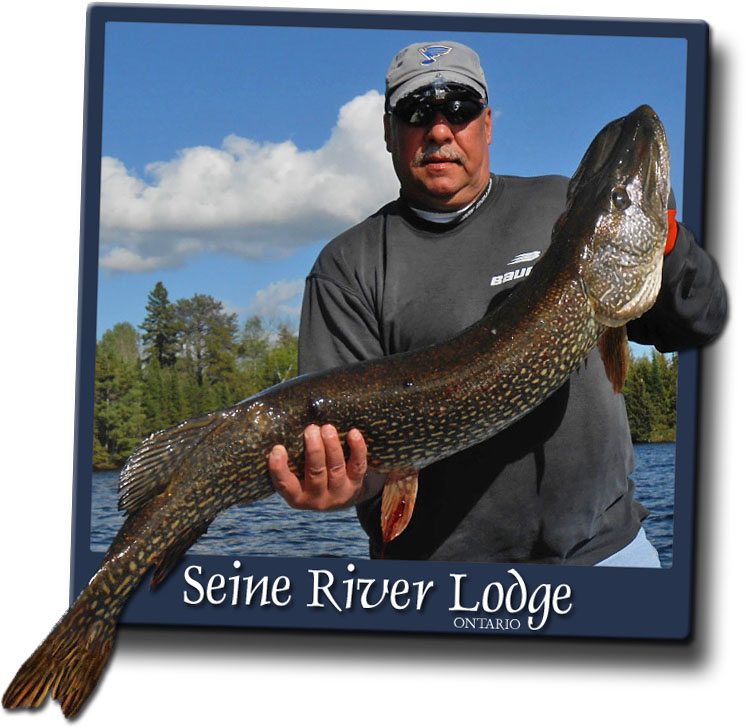 If you're just throwing a line in, not trying for any particular species, often the pike is the fish you'll wind up reeling in.

The trick is to find some of the nicer sized pike.

Seine Chain Northern Pike Techniques: Of all the species on the Seine Chain, the pike respond the best, and most consistently to artificial lures and plugs.

In early parts of the year, using lures and plugs in bays can reap some really nice northern. Casting seems the most common technique, followed by trolling.

We prefer larger spoons (at least 1oz) and plugs but many use smaller with good luck.

Make sure you use a good, steel leader and 15 lb + test line if you are fishing specifically for pike.

Some people try & get large chub or sucker minnows and use them to catch big pike. The premise seems good - big fish eat big bait.

The flaw with this is that there are so many little "hammerhandles" - 1 - 2 lb pike - and they will tear into anything just like their bigger cousins. Basically at about a buck a minnow, it's frustrating to see these smaller pike rip apart this expensive bait.

One of our favorite pike fishing techniques is topwater trolling. On those still evenings when you can see the fish breaking the surface, it's an ideal time to throw on a good topwater plug (like the Heddon Dying Flutter) and troll around the shoreline. Sometimes you don't get the numbers, but my biggest pike have all come from topwater trolling (in the right conditions).

Even though pike usually respond well to artificial bait, minnows can often kick start them during the hotter summer months. Keep your mind & options open during July & August! 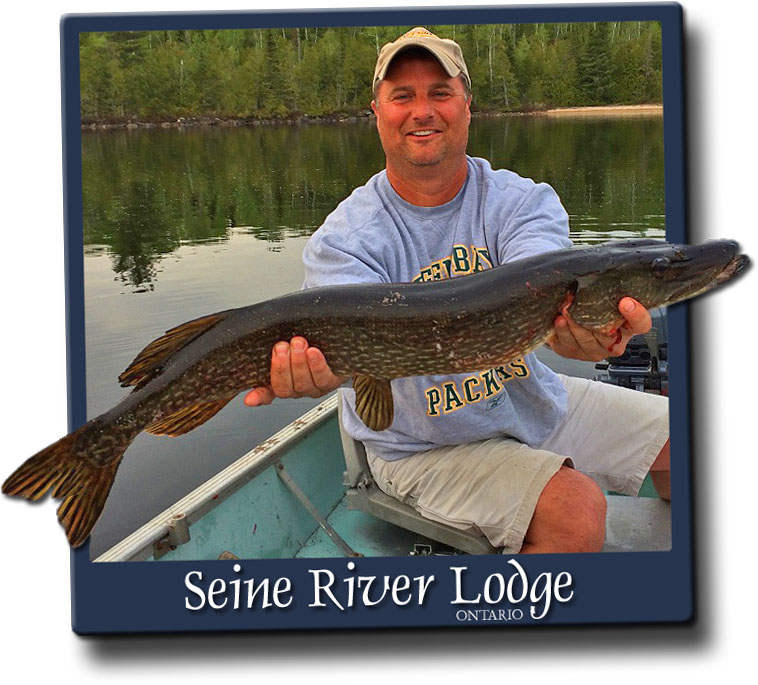 When to Fish Northern Pike on the Seine Chain: In the early season, good sized pike are found in the shallow bays - their mid - late May post spawn feed can be a great time for spectacular pike fishing action.

In the mid - late summer you'll likely be tripping over a lot of hammerhandles if you work the shore - often you're best to work areas that are deep and where there are walleye.

Pike usually bite all day, but mornings and evenings still seem the best.

And the calm nights when the water is like glass is often ideal for topwater trolling.

The Northern Pike Fishery on the Seine Chain: As with many northern lakes, we have a lot of pike.

Yes there are lots of small ones - 1 - 3 lbs, and a good number of medium sized pike.

While we've always seen a number of trophy sized pike each year, the last few years the number has increased significantly. While the big ones are more common in the spring & September, we have seen more nice fish even through the hot summer months

Again, the larger ones are still the exception rather that the rule, but they are there, and in increasing numbers as well.

Take the time to enjoy some pike fishing action on the Seine and find out first hand why they're called "freshwater sharks" - the most aggressive fresh water sport fish around.

Other Lakes With Great Northern Pike Fishing: Although most of our groups never leave the Seine Chain, there are literally dozens, if not hundreds, of nearby lakes where you can fish northern pike.

They range from easy access with boat launches, to lakes that require portaging, canoes etc.

Some of our most popular daytrip northern pike lakes include Milk & Miranda Lakes with some of the best pike populations around, Big McCauley Lake, Twinling Lake, Big Bend Lake, Flora Lake, below the Calm Lake Dam and Marmion Lake to name a few.

You'll be amazed by the water we can offer!

Northern Pike migrate or change their feeding habits with changing water temperatures and different bug hatches. Please read the fishing details based on the month in the menu under fishing.